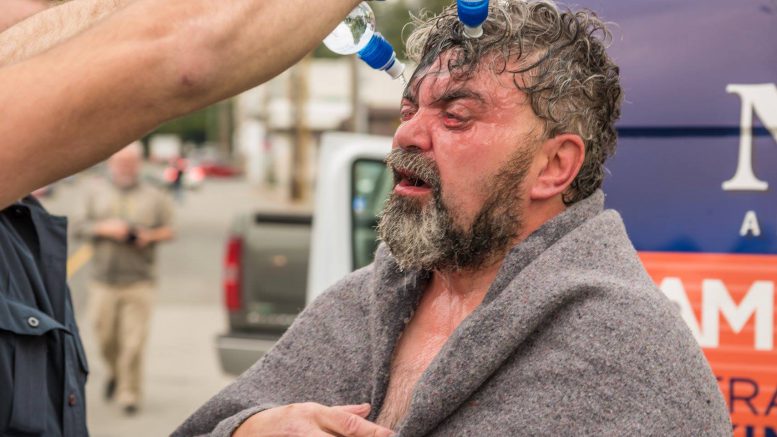 Abbotsford – The homeless woman from the Abbotsford tent city camp on Gladys Avenue, who pepper sprayed a free lance cameraman/journalist, was given 18 months probation.

The first charge was for threatening a former Abbotsford News reporter, Laura Rodgers, who was taking pictures of the camp for a story about the 2015 B.C. Supreme Court ruling regarding camping in public parks.

The second charge and the one that went viral on social media, was for assaulting free lance cameraman Kevin MacDonald, who was filming the camp later that same day. (He was doing a story for CTV Vancouver and contributes to a number of other media outlets including FVN.)

Both Crown and defense made a joint submission, requesting a 12 month suspended sentence, with certain conditions, including a ban on possessing weapons and on contacting Rodgers or MacDonald.

The judge opted for 18 months.

MacDonald said he accepts the decision.

The day after the attack on MacDonald, a FVN reporter went to the tent city and later posted that he felt uneasy being there, and the tension at the tent city and down the street at the Abbotsford Alano Club was palatable. The tent city across from the Mennonite Resource centre has since been dismantled.

This is the video of the attack on MacDonald. He was filming as he was assaulted. NOTE CONTENT AND LANGUAGE: