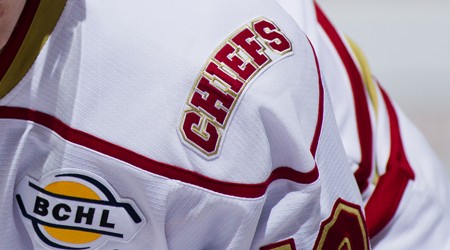 The Warriors got shutout goaltending from Matthew Greenfield Friday night in a 2-0 win at Prospera Centre.

West Kelowna weathered a fierce first period storm and played the perfect road game for the rest, taking a 1-0 lead in this best of seven series. Energized by a large and loud crowd of 3,678, the Chiefs started strong and had a half-dozen blue-chip chances in the first 10 minutes, but couldn’t pop the puck past Greenfield.

Ryan Forbes had the best opportunity.

Linemate Linden Hora snapped a shot from the left wing and Greenfield left a juicy rebound and half of the net open for Forbes. But Greenfield darted from post to post to make the stop.

Minutes later, on a Chilliwack power play, a Dennis Cholowski pass found Vimal Sukumaran uncovered in the goal-mouth, but No. 11 couldn’t beat Greenfield on the backhand.

Somehow, despite leading 16-7 on the shot-clock, the Chiefs found themselves trailing 1-0 on the scoreboard after 20 minutes.

West Kelowna scored the opening frame’s only goal on the only decent scoring chance they got.

Austin Adam was caught up ice and Cholowski was the lone man back as Liam Blackburn led a two-on-one rush. Cholowski nearly tied up Blackburn without a shot, but the Prince George native fought him off and slid the puck across the goal-mouth to Kylar Hope. The BCHL’s playoff goal-scoring leader pulled it to the backhand and beat Chiefs netminder Aidan Pelino for his 13th of the post-season.

The Warriors of period two looked a lot more like the pain-in-the-butt crew Chilliwack fans came to loathe in round three, dialing up the forecheck and locking it down on D. West Kelowna applied relentless pressure offensively and produced the only goal of the middle frame with 7:02 to go.

Bryan Basilico got the assist with a backhand shot from the high slot. The puck clanged off the left post and found the stick of Kyle Marino camped beside the Chiefs net. He punched it past Pelino for his fourth of the playoffs.

Defensively, the Warriors didn’t give the Chiefs a sniff, keeping everything to the outside and limiting Chilliwack to eight harmless shots.

West Kelowna continued to stifle the Chiefs attack in the third period. Chilliwack’s best chances came on a late power play — the Chiefs had a 3-1 edge in man advantage chances — but they couldn’t cash in.

Head coach Jason Tatarnic called Pelino to the bench with over three minutes remaining, throwing out an extra attacker, but that failed as well.

With just over one minute to go, tempers flared as Sukumaran and Marino got into a shoving match along the boards in the neutral zone. Marino started throwing punches and Sukumaran never dropped his mitts as Marino flung him to the ice. Though Marino took five or six ungloved shots at Sukumaran’s face and Sukumaran threw none, both were given 10 minute misconducts and Sukumaran drew an extra two for slashing.

The remaining 64 seconds went by quietly.

The Fortis BC Energy Player of the Game was Hora.

The West Kelowna Warriors took a 1-0 series lead last night with a 2-0 win in Chilliwack. Warriors netminder Mattew Greenfield turned away all 37 Chiefs shots to earn his 13th win of the post season.

Games three and four are scheduled for Monday and Tuesday in West Kelowna.