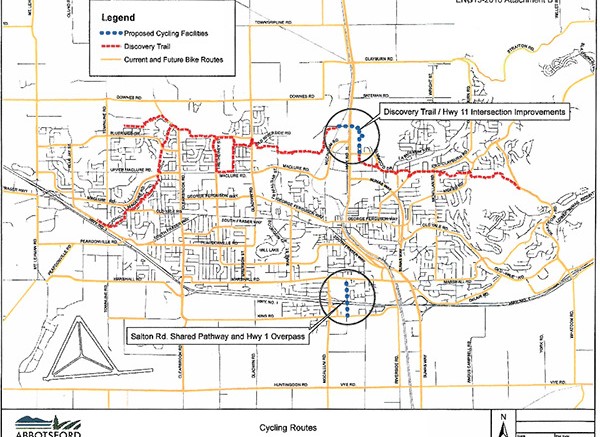 Abbotsford – Timing is everything.

With a week to go before the first Federal Budget from the Justin Trudeau Liberals and their promise of infrastructure spending, comes word that the City of Abbotsford would like some money to pay for two pedestrian/bike lanes which would be overpasses across Highway One and Highway 11 (See map).

A map from the City of Abbotsford shows the locations of two proposed additions to the city’s cycling and walking trails.

The initial pitch would be to Victoria and the Provincial Government for a cycle path on Salton Road and a cycling/pedestrian overpass over the highway (Hwy One).

The other is a pedestrian/bike light at Valley Road and Highway 11 that would connect two major segments of the Discovery Trail.

The cost is billed at $5.75 million, and the city is seeking the funds through the province’s BikeBC program, which is providing $6 million in funding to communities this year.

The other question could be, would federal money be available considering one of the routes, Highway One, is the Trans Canada and the Feds did promise money in their election platform last fall.