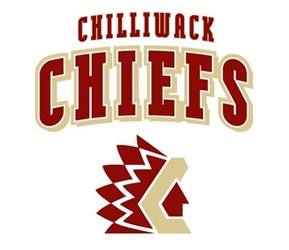 Coquitlam – Austin Adam celebrated his 21st birthday by scoring at the 5:23 mark of the first overtime period, giving the Chiefs a 4-3 win in Coquitlam Monday night.

Chilliwack now leads the first round best of seven series 3-0. Despite the Chiefs dominating  the shot clock, the game was tied after each of the three periods.

The Chiefs took a 1-0 lead at the 8:48 mark of the opening period when Chiefs defenseman Dennis Cholowski wound his way into the Express zone and wired his second of the playoffs past Coquitlam netminder Lawson Fenton.

A goal with 31 seconds left in the first period by Cameron Bertsch tied the game at one.

In the second period the Express were gifted a full two minute two man advantage when Linden Hora (charging) and Ryan Forbes (elbowing) were both flagged at the 6:20 mark. The Express took full advantage, taking a 2-1 lead on Austin McIlmurray’s second goal of the playoffs.

At the 13:00 minute mark Jordan Kawaguchi’s 3rd of the playoffs after wild scramble in front of the Express net tied the game at two.

After McIlmurray’s second of the game put the Express back up by three, Jeremy Germain finished off a nifty three way passing play to knot the game at three after two period.

The Chiefs dominated the third period but were not able to beat Fenton setting the table for Adams’ overtime heroics.

Aidan Pelino finished the night with 17 saves to earn this thirds straight win of the season. Fenton stopped 41 shots in a losing effort.

Why Not? – Chiefs Add Zamboni Driver as Emergency Goalie (Now THIS is Good PR)