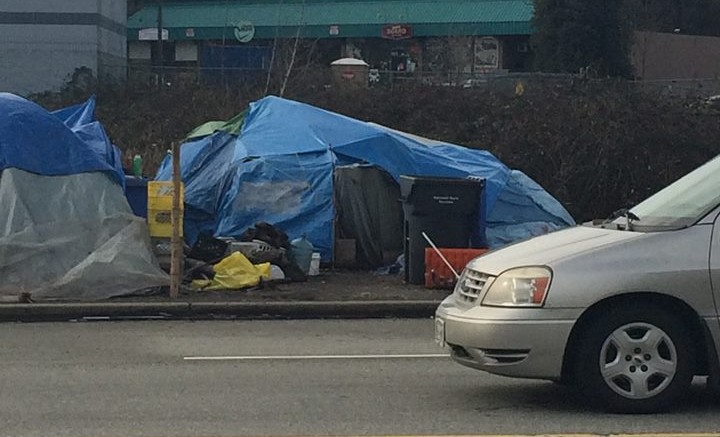 Abbotsford – The people that live in the  Gladys Avenue homeless camp have been told to remove their tents by next Wednesday February 10. The eviction notices were posted Tuesday February 2, one day after council officially adopted its new parks bylaw.

That said (excluding three parks, Mill Lake, Exhibition Park and Civic Plaza) overnight homeless campers can stay overnight from 9 PM to 7AM but the concern is that many in addiction and/or with mental health problems have no concept of time and the set up and take down times are really a non-event for the homeless.

Mayor Henry Braun says he wants this transition to be respectful. Braun said the Gladys camp is unsafe and dirty.

Other concerns include trust. Moving to the temporary shelter on Riverside Road is only a band aid solution until May 30th when that facility shuts down. The public perception of the homeless is akin to discrimination. Many people still look down on the homeless and not really stepping up to the plate to find solutions to the problem and not just temporary shelter.

That includes emotional and mental health support, not just financial with a roof over their heads.

Trust among the campers is another issue, particularly stealing each others drugs and shoes.

Trust with the media was shaken late last year when CTV cameraman Kevin MacDonald was maced by a female camper. MacDonald, a supporter of the campers, was taking shots when he was attacked. She has since been charged with assault.

The irony with the Gladys Avenue camp is that it is across the street from the Mennonite facility that includes a thrift store and restaurant. Many campers exclaim that they have not reached out to “help their fellow brothers and sisters”.

The Gladys camp is one block away from the Abbotsford Alano Club on Cyril Street, which promotes 12 Step meetings. Those heavily in addiction or mental health issues won’t go there. In fact, some of the campers are now across from the Alano on Cyril which is designated as a park, next to a busy restaurant. That owner says his business is suffering because patrons are afraid to park there and eat.

Digging And Chipping Out