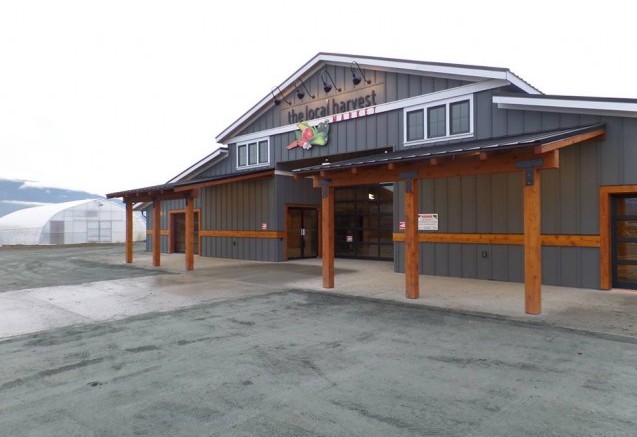 Chilliwack, BC -February 2 UPDATE – At Chilliwack City Council – The Owners of the Local Harvest Market received a 60 day warning to get their permits and by-law infringements in order.Failing that, they would be fined $500 every two weeks until compliance.

Councilor Jason Lum was the lone councilor opposed to the plan. He wanted no notice given. Lum took to Twitter stating “I think the no-occupancy order, and fines are punitive and unnecessary. There are better ways to find solutions.

Council agonized over their decision which included just a two weeks notice instead of 60 days.

ORIGINAL STORY – The Local Harvest Market on Lickman Road must face the music in the upcoming meeting of Chilliwack City Council. The building opened  in 2013 and at the the time,  the main building was found to be in contravention  certain bylaws and  safety provisions in the BC Building Code.

FVN has learned from sources that rumours swirled that the owners never obtained proper building permits.

The owner was in front of council  in 2015 and was given an extension to make upgrades, which apparently never happened.

Here is the City’s official media release: City Council is often tasked with the difficult duty of enforcing Provincial legislation and City Bylaws in a fair and equitable manner. On February 2, 2016, Council will consider posting a “No Occupancy” notice on The Local Harvest Market, at 7696 Lickman Road, as the business has not come into compliance with the public safety provisions of the BC Building Code and City Bylaws.

According to the staff report, the continued use of the existing building on the property for commercial and assembly purposes is not permitted under the Building Regulation Bylaw, the Business License Bylaw, and the BC Building Code, posing a public safety concern. As well, the City has obtained legal advice on the matter.

City staff have worked with the property owner since the file opened in 2012 in an attempt to achieve voluntary compliance. Thus far, Council has provided the owner with additional time to bring the building under compliance, including extending deadlines to accommodate the growing season. The property owner has long been aware of all deficiencies and the steps necessary to come into compliance.

As the staff report notes, there are currently numerous technical issues relating to the Fire Code, BC Building Code and Agricultural Commercial Zone provisions that have not been addressed. Specifically, there are concerns regarding the stability and structural soundness of the building, fire safety, emergency exits and fire separation, insulation and ventilation, mechanical and electrical, as well as sanitary and storm servicing. In addition, the property is currently in contravention of the ALC’s non-farm use approvals. According to the ALC the new proposed building is not consistent with the conditions of the decision of the Commission.

Chilliwack Council will enter the meeting with an open mind, carefully reviewing the staff report and history of the file. Key items for consideration will include public safety concerns, liability concerns, and the duty to enforce bylaws and Provincial legislation in a fair and equitable manner.