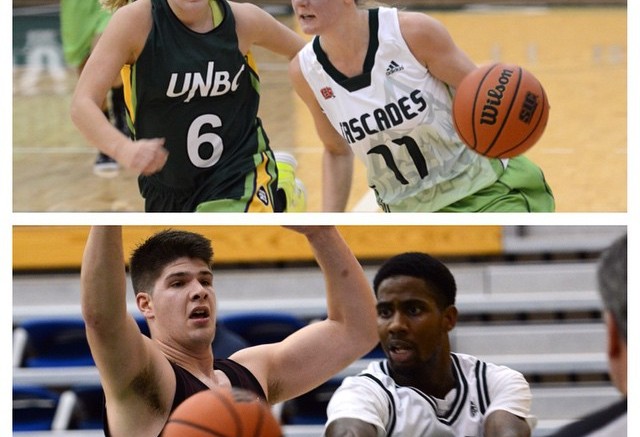 Abbotsford/Chilliwack – Men’s Basketball season preview: Cascades have the talent to contend once again

As they tip off their conference schedule this weekend, the University of the Fraser Valley men’s basketball team’s long-term goals include a fifth straight trip to the Canada West Final Four – and a return to the CIS national championship for the first time since 2012.

The Cascades no longer have the services of standout post players Jasper Moedt and Kadeem Willis, both of whom wrapped up their five years of eligibility last spring, but head coach Adam Friesen has a nice mix of seasoned veterans and promising newcomers at his disposal in 2015-16.

“We’re a talented group,” said Friesen, whose team finished first in the Pioneer Division last season with a 17-3 record and went on to earn the Canada West bronze medal. “We have some guys being put in different roles, but I think we’re a deeper team than last year, and also more versatile.

“I think our goals are the same as last year. It’s yet to be determined whether we can be better than last year’s team, but the opportunity is there in front of us to go after it.”

Guards Kevon Parchment and Manny Dulay and power forward Nate Brown comprise a solid veteran core for Friesen to build around. Parchment, a fifth-year shooting guard from Scarborough, Ont., is a tenacious two-way force and was a Canada West third team all-star in 2014-15. He paced the Cascades in scoring last season with 14.7 points per game, and his 6.2 rebounds and 3.0 assists both ranked second on the squad.

Dulay, a fourth-year point guard from Surrey, B.C., is one of the conference’s most prolific and efficient three-point shooters – he swished 38.9 per cent of his attempts from downtown in 2014-15, and averaged 11.3 points and a team-high 3.9 assists per game. Brown, an imposing 6’6” post presence from Fresno, Calif., posted 11.3 points and 5.7 boards per game last season, his first with the Cascades.

“They’re stepping up to the plate,” Friesen said of Parchment, Dulay and Brown. “They’ve done a great job with their work ethic and with setting a tone with how things are going to be, whether at practice or working on their own time.”

Vijay Dhillon, a fourth-year combo guard from Richmond, B.C., returns to take on a bigger role after averaging 8.8 points and 2.5 assists last year, and he’s had an outstanding preseason. Navjot Bains, a 6’6” centre from Delta, B.C., provides crucial rebounding and interior defence in the middle.

Friesen said that developing consistency over the course of the regular season will be crucial for his squad if they hope to make another deep playoff run.

“We need to value every possession – understanding the importance of doing our jobs every single time, and limiting our turnovers,” he said.

The University of the Fraser Valley women’s basketball team embarks on the 2015-16 Canada West regular season with a new-look roster, but one that has the talent to make a deep run in the Canada West playoffs.

“It’s a different team, with a lot of toughness and athleticism to it,” analyzed Cascades head coach Al Tuchscherer, whose program has earned conference playoff berths each of the past five years and made four straight Canada West Final Four appearances between 2011 and 2014. “They’re skilled, and they play with a lot of determination. You combine those things, and this team could make some noise in Canada West.”

The Cascades women’s squad has waved goodbye to a handful of impact players including Sarah Wierks (a second team All-Canadian in 2014-15 who led the CIS in rebounding and was fourth in scoring), Celeste Dyck (10.9 points and a team-high 4.3 assists per game), and Nataliia Gavryliuk (13.1 points per game).

But Tuchscherer has no shortage of talent to work with this season. Fourth-year power forward Katie Brink is the most accomplished returnee from last year’s squad – her 14.8 points per game ranked second on the Cascades in 2014-15. The Abbotsford product finished the year strong with 11 straight double-digit scoring performances, including five outings of 20-plus points.

Brink will be reunited this season with her former high school teammate Kayli Sartori – the two players were part of the W.J. Mouat Hawks’ B.C. AAA high school championship-winning squad in 2011. Sartori suited up for the Cascades for three seasons and was a CIS tournament all-star in 2014 as UFV won the national bronze medal, before electing to take last season off to work on her family’s farm. She’s back this fall, and has been an impact player throughout the preseason.

“Katie and Kayli have experienced a lot of success together – they’ve won championships and been key to some of our past success,” Tuchscherer enthused. “They lead us competitively, they play a physical brand of basketball, and they’re highly skilled in their positions.”

The Cascades are also welcoming a pair of high-profile transfers in Shayna Cameron (formerly of Quest University) and Sydney Williams (Thompson Rivers University). Chilliwack product Cameron spent four seasons at Quest was named the PacWest female athlete of the year across all sports in 2014-15. Williams, who hails from Langley, was the Canada West rookie of the year with the TRU WolfPack in 2013-14. Both Cameron and Williams are guards.

Knockdown three-point shooter Kaitlyn McDonald and defensive standout Hailey Kendall will also be key members of the Cascades’ backcourt, while rookies Taylor Claggett and Kate Head have worked their way into the rotation with outstanding preseasons. Claggett, a forward out of Abbotsford’s Mennonite Educational Institute, posted double-doubles in two of the Cascades’ last three non-conference games, and Maple Ridge Secondary product Head has earned the starting point guard spot.

“Perhaps our most pleasing part about our exhibition schedule has been the play of those two freshmen,” Tuchscherer said. “Playing at highly demanding positions at point guard and centre, and really stepping up and exceeding my expectations for what they were going to bring to the table this season.”