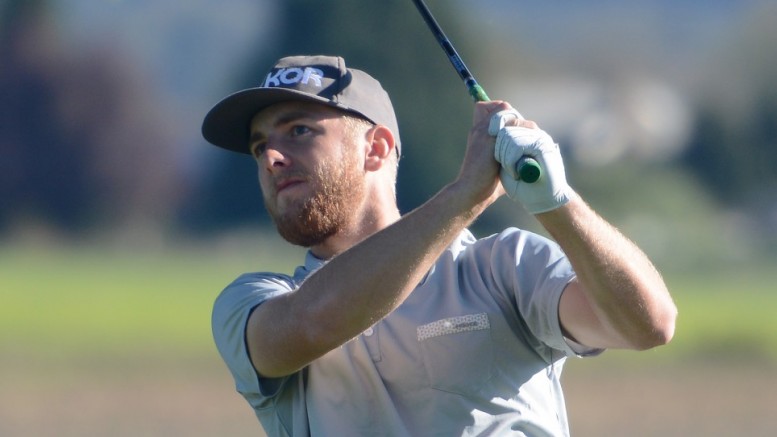 On the eve of the PING CCAA Golf National Championships, two golfers from the host University of the Fraser Valley Cascades were honoured as All-Canadians at the CCAA awards banquet.

Hannah Dirksen, a second-year Cascade from Mission, B.C., made her debut on the women’s All-Canadian team, while fourth-year UFV golfer Connor O’Dell of Maple Ridge, B.C. was named a men’s All-Canadian for the second straight year.

Dirksen captured the PacWest individual title by four strokes, thanks in large part to tournament wins at the KPU and UFV Invitationals. Additionally, she led the Cascades women’s team to the PacWest conference silver medal.

“I’m so proud of her as a player this year – how she’s matured in her skill level, but also in her leadership on the team,” said Cascades assistant coach Jennifer Greggain.

O’Dell finished second in the PacWest overall standings this season, highlighted by a three-stroke victory at the UFV Invitational, to earn his second All-Canadian nod. He also helped guide the Cascades men’s team to the PacWest silver medal.

“Connor did exactly what we hoped and expected him to do – he delivered another All-Canadian performance,” UFV head coach Chris Bertram said. “We certainly hope his best is yet to come at nationals.”

The PING CCAA Golf Championships tee off on Wednesday morning at Chilliwack Golf Club. The tournament continues Thursday and Friday, starting at 8:30 a.m. each day.

Men’s Soccer: Cascades earn 2-2 draw on the road vs. Spartans

The University of the Fraser Valley men’s soccer team twice held one-goal leads on the road at Trinity Western, but the Spartans twice battled back to salvage a 2-2 draw.

Cascades striker James Najman staked his team to an early lead in the 12th minute, but TWU’s Mitchell Urzinger equalized shortly after the halftime break. UFV midfielder Kree Byrne restored the visitors’ advantage in the 69th minute, only to watch Matthew Roxburgh get the hosts back on even footing in the 85th.

“It’s disappointing when you have a lead twice in a game but you just come away with a point,” Cascades head coach Tom Lowndes noted. “I didn’t think we were good enough defensively for long portions of the game – we were good in spurts.

“But I’m proud we battled and we competed, and we got a point. To take four points from Trinity Western in a season is good.”

The Cascades’ Najman scored the lone goal of the first half when he curled a well-struck ball across the face of the net to the far top corner.

TWU’s Jarvis Ambaka made attempts to see the ball to the net in both the 35th and 38th minutes, with his second offering thumping off the crossbar.

Byrne had a wonderful opportunity to double UFV’s lead in the 40th minute from 12 yards out, but his shot sailed high.

The second half opened with new energy from the Spartans as Urzinger scored his first goal of the season in the 47th minute, with an assist to Brayden Gant.

The Spartans nearly took the lead in the 60th minute when Urzinger blasted a shot from in tight, but UFV goalie Alex Skrzeta, who made six stops on the night, was equal to the task.

Byrne put UFV ahead and excited a large lot of visiting supporters at Rogers Field with a tidy finish off a feed from Connor MacMillan, who had gotten loose down the left side.

The comeback efforts of the Spartans were finally successful when Roxburgh scored with five minutes left to tie the game, with a patient assist from Adekugbe.

The Cascades men’s soccer team is off this weekend. They wrap up the regular season on the road vs. UVic on Oct. 23 and vs. UBC on Oct. 24.

The University of the Fraser Valley women’s soccer team fell to the Trinity Western Spartans for the second time in five days, dropping a 5-0 decision at Rogers Field in Langley on Tuesday evening.

The CIS No. 9-ranked Spartans, coming off a 2-1 win over the No. 10 Cascades on Friday at Abbotsford Senior Secondary, opened the scoring in the 16th minute via Krista Gommeringer. The Cascades worked hard to generate an equalizer and had a strong start to the second half, only to watch TWU go up 2-0 on Alessandra Oliviero’s goal in the 64th minute. That forced UFV to really open things up offensively, and the Spartans struck for three more goals on the counterattack.

The Cascades actually out-shot TWU 16-14, and earned five corners compared to one for the Spartans. Nevertheless, Trinity Western (7-1-2, 23 points) was lethal with its finishing and moved four points clear of UFV (6-3-1, 19 points) in the West Division standings.

“It was a frustrating evening,” Cascades head coach Rob Giesbrecht said. “I really am proud of my team for how we played. We passed the ball very well, we created goal-scoring opportunities. The challenge for us is to create higher-quality goal-scoring chances with a little more composure in the attacking third. At times, we settled for half-chances when we could have worked for better chances. Much like Friday’s game, we made a few mistakes and got punished.”

“I’m a bit perplexed to be honest,” said Spartans coach Graham Roxburgh. “I thought for large stretches of the game, we didn’t play as well as I think we can and yet we won 5-0. I am really pleased with our finishes.

“I don’t want to take anything away from UFV,” he added. “It sounds strange to say that after a game that ended 5-0. That game was a lot closer than what the scoreline reflects. It thought it was a great battle between two teams and to be honest, I thought they could have been up two or three before we went up. Sometimes soccer is a funny game and tonight it was a little bit bizarre.”

The Cascades are back in action at home this weekend – they take on the Manitoba Bisons (Friday, 4 p.m.) and the Winnipeg Wesmen (Saturday, 5 p.m.) at Abbotsford Senior Secondary.

Be the first to comment on "UFV Sports Tuesday – Soccer, Golf All-Stars"