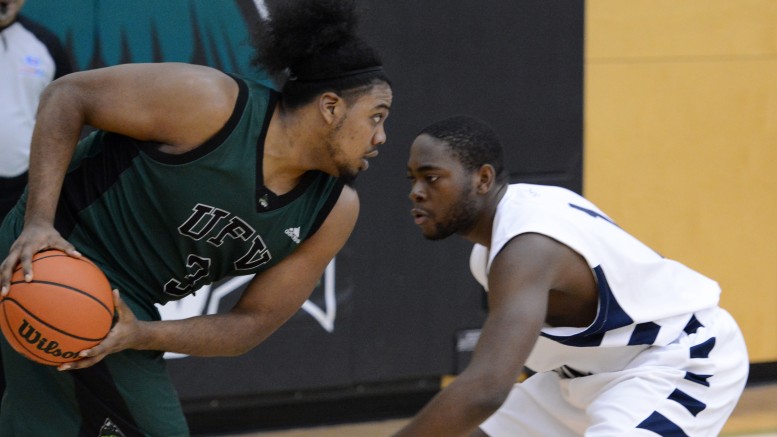 The University of the Fraser Valley men’s basketball team dropped a 91-82 decision to the Saskatchewan Huskies in the opening game of the Guy Vetrie Memorial Tournament, hosted by the University of Victoria.

The exhibition tourney also features the host Victoria Vikes and the Carleton Ravens, winners of 11 of the past 13 CIS national championships. The Vikes and Ravens played in the late game on Friday.

The Cascades are back in action on Saturday at 3 p.m. vs. Carleton, and on Sunday they play UVic at 2 p.m. The games will be webcast at canadawest.tv (pay per view).

The Huskies led 19-17 at the end of the first quarter and 47-39 at halftime, and they stretched the lead to 16 points with just under seven minutes remaining in the fourth. The Cascades kept grinding, though, and reeled off a 10-0 run to get to within 83-77 with two and a half minutes to go.

But Bennett-Boire, a rookie point guard who graduated from Abbotsford’s Yale Secondary earlier this year, made baskets on three of the Huskies’ next four possessions to seal the win.

The UBC Okanagan Heat picked up their second win of the season on Friday evening at Abbotsford Senior Secondary, defeating the University of the Fraser Valley 3-0 and snapping the Cascades’ three-game win streak in the process.

Heat forward Luke Warkentin notched two goals in the first half and midfielder Enzo Paal added one more after the break to secure the victory for UBCO.

The Heat’s first clean sheet of the season lifted their overall record to 2-4-1 (W-L-T). They’re in Langley tomorrow night where they’ll kick off at 7:15 p.m. against the Trinity Western Spartans.

The Cascades now sit at 4-3-0 and host the Thompson Rivers WolfPack tomorrow at Abbotsford Senior. Kick-off is set for 7:30 p.m.

“We were second-best all over the park,” UFV head coach Tom Lowndes analyzed. “The first half was probably the worst 45 minutes we’ve had with this group, including preseason. Whenever you’re 2-0 down at halftime, it’s going to be hard to get yourselves out of that.

“The biggest thing was we got outworked. I think they wanted it more – they played like a desperate team that wanted the points. I think we thought, at times, we could just show up and that would be good enough. In Canada West, that’s never going to happen. If you don’t work hard, your talent counts for nothing.”

UBCO opened the scoring in the 16th minute after the Cascades tried unsuccessfully to clear a cross. Defender Brady Weir headed the ball forward, but it took a deflection and landed in Warkentin’s path. The CIS rookie drilled a shot just inside the right post to give his team an early lead.

Taking advantage of a quick free kick in the 41st minute, Paal played the ball to Cole Kingzett who touched the ball past Cascade defender Sahib Phagura. The winger laid the ball across goal just past the outstretched arms of UFV’s goalkeeper Alex Skrzeta. Warkentin was first to it and finished calmly into a wide-open net to give his team a 2-0 lead heading into halftime.

Kingzett was also instrumental in the Heat’s third goal of the game. He got in behind the Cascades defence and broke in on Skrzeta, who jumped off his line to cut off the attack. Kingzett pushed the ball wide past the keeper who had no choice but to bring the Heat forward down in the box. Paal stepped up to take the PK and struck a hard ball towards the left post. Skrzeta ranged to his right and made the initial stop, but Paal quickly pounced on the rebound and tucked the ball in.

“I think we started out the first 10 minutes playing well – we were all over them,” Cascades captain Colton O’Neill said. “Once they got their goal, it went south fast. We weren’t able to recover.

“We have a game tomorrow, and we have to forget about this one and move on. The season’s too short to get in a slump. We need more points if we want to make the playoffs. We have to go again tomorrow and regroup.”