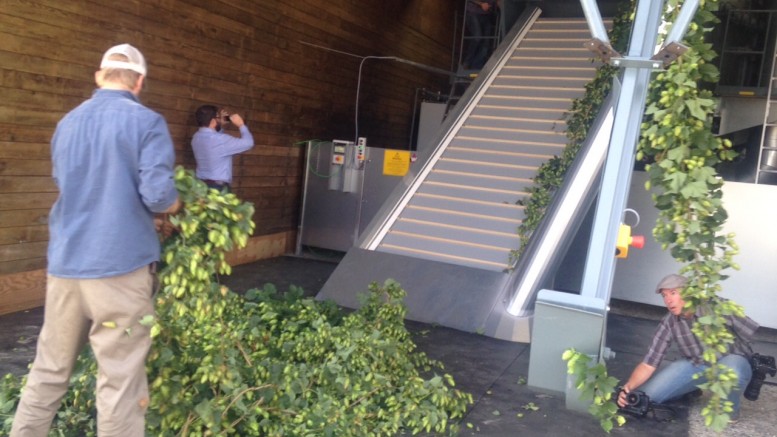 Abbotsford, BC – BC Hop Fest, Canada’s first wet hopped beer festival is coming to the Fraser Valley October 3, 2015! Staged on an Abbotsford hop farm, this is a celebration of all things “hoppy”, especially beer!

What is wet hopped beer you ask and why is this not just another beer festival? Often touted as the Beaujolais Nouveau of craft beer, this unique brew requires that hops are fresh off the bine and into the brew master’s kettle while their oils and resins are still at their peak, usually within 24 hours. Wet hopped beer is only available at hop harvest time and BC Hop Fest is the first festival to exclusively showcase 17 of BC’s best breweries and their fresh beer offering!

Diane Stewart, representing BC Hop Company Ltd. and co-sponsor of BC Hop Fest, can’t get over the response to the event, “We are thrilled to have so many breweries attending our first year and really happy to have the BC Craft Brewers Guild as our partner in making it happen!”

The market share for artisanal beer in British Columbia has more than doubled in the past four years, from nine per cent of all beer sales in 2009 to 20 per cent in 2014 according to Ken Beattie, executive director of the B.C. Craft Brewers Guild. Beattie says, “The timing for BC Hop Fest is amazing. Hosting the event at the beginning of Craft Beer month, on a working hop farm with many of the attending brewers using BC Hop Company hops in their fresh beer is perfect. There couldn’t be a better way to celebrate all things local, the craft beer industry and the resurgence of the hop growing sector in British Columbia”.

Inspired by the great traditions of hops production throughout the Fraser Valley and the Pacific Northwest, BC Hop Company in Abbotsford is excited to bring locally grown hops back to the Valley. “Our mandate is larger than just us; we are supporting family farms by growing, processing and distributing world class hops to the BC craft beer industry.” says Stewart.

BC Hop Fest will combine great food vendors, live entertainment, fresh beer tastings and a main stage that will feature local business sharing innovative uses for hops! On the culinary side of things, Lepps Farm Market will be creating hop infused sausages, the international award winning ChocolaTas will be featuring a hop chocolate and Chef Stu Smith will be demonstrating hop and beer inspired recipes. Simply Perfect Flowers will be demonstrating the many uses for hops in floral arrangements and Dead Frog Brewery’s Derrick Smith will share the secrets of brewing a wet hopped beer.

Event producer, Donna Dixson says, “In addition to all the great things happening at BC Hop Fest, we are looking forward to hosting an international trade mission consisting of delegates from some of the biggest beer brewing states in the USA. Intrigued by the incredible growth of the craft beer industry in British Columbia, the

mission will facilitate connections between BC hop growers, equipment manufacturers, bottlers, and others. This is an incredible opportunity for Abbotsford and the Fraser Valley and we are glad to be part of it.”

The BC Craft Brewers Guild represents craft brewers from all over BC. Some are large and others smaller, but they all brew flavorful local beer with passion and dedication. The mission of the guild is to support the ongoing creation and discovery of truly great BC Craft Beer.

The BC Hop Company Ltd. is dedicated to supporting family farms through the world class processing and distribution of high quality BC grown hops to brewers, culinary experts, and hop heads everywhere!

For more information about the history of hops, please visit this link http://www.chilliwackmuseum.ca/hops/BG_Links.html

Be the first to comment on "BC Hops Fest In Abby October 3 – Celebrating All Things Beer!"