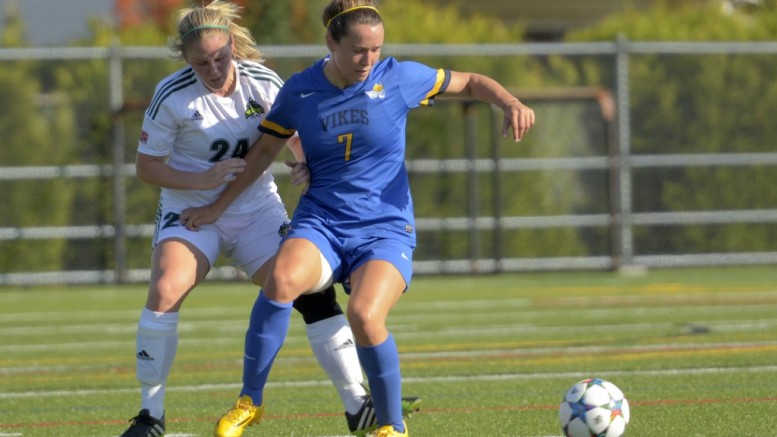 Glanville, a third-year TRU striker, scored twice in the first half and added an assist on Oriol Torres’s goal after the break as the WolfPack blanked the Cascades 3-0 on Sunday afternoon in Kamloops.

The Cascades were coming off a 2-0 win over the UBC Okanagan Heat in their Canada West regular season opener on Saturday, but weren’t able to match that performance in the second game of a back-to-back set on the road.

“I’m disappointed in today, based on how well we did yesterday,” Cascades head coach Tom Lowndes said. “What a difference 24 hours makes – a complete contrast. We got outworked, out-battled. They wanted it more than us. Credit to TRU – they had a couple of chances, and they took advantage.”

The Cascades now turn their focus to preparing for their home openers next weekend. They host the UBC Thunderbirds on Friday, and the UVic Vikes on Saturday. Both games kick off at 7:30 p.m. at Abbotsford Senior Secondary’s Panther Field.

Glanville opened the scoring in the fifth minute, off a feed from Colton Walker. He made it 2-0 off a Cascades turnover in the 29th minute, then set up Torres for the third WolfPack goal in the 59th.

The Cascades out-shot TRU 16-8, and had a great scoring chance in the 32nd minute when striker James Najman got his head on the ball and sent it just over the WolfPack cage.

In the second half, UFV had two apparent goals – by strikers Daniel Molendijk and Daniel Davidson – disallowed on offside calls.

“In reality, we got what we deserved,” Lowndes analyzed. “We weren’t at the races today.”

UFV and TRU, both 1-1-0, are tied for third in the Pacific Division of Canada West.

The WolfPack were coming off a 3-1 loss to Trinity Western on Saturday.

“I think the guys realized that they didn’t play to their potential yesterday,” said WolfPack head coach John Antulov. “Not a lot had to be said. They did what they had to do today. You saw in the first half today that in the centre of the park, everyone was battling and we were winning most of the balls. I said before the match to the guys that in a worst-case scenario, battle and show commitment and don’t take anything off. They did that.”

The University of the Fraser Valley women’s soccer team picked up its first win of the young Canada West season on Saturday evening, beating the UBC Thunderbirds 2-1 at Abbotsford Senior Secondary.

Cascade defender Jade Palm headed home the game-winner in the second half, off a corner kick after the ball caromed off forward Shelby Beck. It was Beck’s second assist of the night – she also set the table for Monika Levarsky to open the scoring in the 14th minute.

Shayla Chorney replied for the Thunderbirds shortly after Levarsky’s goal, but UBC could not find an equalizer despite a strong push forward in the second half.

“It means a lot,” said Cascades head coach Rob Giesbrecht, whose team improved to 1-0-1 on the season. “Yesterday (in a scoreless tie with UVic) we felt we let one get away. . . To play a very good opponent in UBC today, to come out and get the result, it just speaks to the character the girls have and their whatever-it-takes mentality. I’m so proud of them.”

The T-Birds (2-1-0) were coming off a 2-0 win on Friday over the Trinity Western Spartans, handing TWU its first CIS home loss in nearly two years.

But it was the Cascades who were the more dangerous team in the early going on Saturday. In the sixth minute, Danica Kump sent a ball across the mouth of goal where Brittney Zacharuk had her effort on goal knocked into touch by Thunderbirds’ keeper Olivia de Goede, who ranged quickly to her right to deny UFV of their first goal of the campaign.

UBC’s first chance to open the scoring came in the 14th minute when Shayla Chorney sent Taylor Shannik in on goal with a nice through ball. But Shannik’s shot sailed high.

The Cascades took full advantage of the missed attempt. Beck sent the ball into the box from the right side where Levarsky drove a hard, low shot to the far corner past the outstretched arms of de Goede.

UBC responded in the 20th minute, capitalizing on a corner kick. After Shannik delivered the ball into the box, Krista Whittaker sent the ball back across the grain where Chorney launched a looping header over Cascades goalkeeper Kayla Klim.

The Thunderbirds controlled play in the early part of the second half but were unable to find the back of the net. Instead, the Cascades added their second goal.

Off a Sunayna Samra corner kick in the 57th minute, Beck nudged the ball to Palm who got just enough of it to send it over the goal line.

“I went up, and there was a goalie and a player behind me, and I just flicked it over and it went in,” Palm recounted.

“My first year here I scored four goals, so I’m kind of aiming to top that this year. We’ll see how that goes.”

UBC continued to pressure the Cascades and thought they had a tying goal off the foot of Nicole Sydor in the 82nd minute, but she was adjudged to be in an offside position. That was as close as the T-Birds would come.

The Cascades are at home again next week to face the Thompson Rivers WolfPack (Friday, Sept. 18, 5 p.m.) and the UBC Okanagan Heat (Saturday, Sept. 19, 5 p.m.). Both games are at Abby Senior.

The University of the Fraser Valley women’s soccer team mounted a strong push in the second half of their Canada West regular season opener against the Victoria Vikes on Friday afternoon at Abbotsford Senior Secondary.

But the Cascades were unable to find the back of the net despite several glorious chances, and the game ended in a scoreless draw.

“It was a tough battle – it always is against UVic,” Cascades head coach Rob Giesbrecht said afterward. “I thought it was quite even in the first half, and I challenged my team to play with a bit more intention as opposed to hope. I thought that turned it for us – I thought we had the ball in their end a lot more, so territorially we had the advantage and we had more shots at goal. We still maybe lacked that final bit of quality to create the scoring chance that leads to a goal.”

The Cascades (0-0-1) wrap up their weekend schedule with a tilt against the UBC Thunderbirds on Saturday (6:15 p.m. at Abby Senior). The Vikes (0-1-1) are also in action tomorrow – they visit the Trinity Western Spartans at 5 p.m.

UFV, ranked No. 7 in the CIS national poll, had a strong start on Friday and very nearly opened the scoring in the eighth minute. Off a Sunayna Samra corner kick, Tristan Corneil took a volley from 10 yards out that drilled the crossbar.

The Vikes came back down and had a great chance of their own in the 10th minute. Cascades keeper Kayla Klim made the initial save, and on the rebound, Danica Kump cleared a UVic shot off the goal line.

In the 19th minute, the Vikes’ Emma Greig got a good look at goal off a corner, but Klim was up to the task.

The second half was all UFV – they outshot UVic 9-2, including five shots on target. But Vikes keeper Meaghan Storie was razor-sharp, and her best work came in the 51st minute. With Shelby Beck swooping in on a partial breakaway, Storie moved laterally with the Cascades striker and dove to parry her shot. Gurneet Dhaliwal continued the flurry of chances with a drive to the left post, but Storie smothered it.

“We had a few scrambles, we had a couple half-breakaways and that kind of stuff where we very easily could have scored and maybe should have scored,” Giesbrecht said. “But we’ve got to keep believing, keep trusting, and do it for 90 minutes as opposed to 45.”

The Cascades will look to find a bit more finish against UBC on Saturday.

“UBC’s a really athletic team – they have some really good forwards,” said Dayle Jeras, who had a strong game at centre back on Friday for the Cascades. “So we have to be ready in the back. We have a really good core of us in the back with our three defenders and our two holding mids, and everyone played really, really well today.

“We just have to really get our attack going. That’s something we sometimes do struggle with, but it’s definitely a group effort, it’s not just up to the forwards. We just have to start on our front foot and trust each other, and go at them right from the beginning.”

Midfielders Connor MacMillan and Kree Byrne registered the goals, while Cascades keeper Alex Skrzeta was required to make just one save en route to the clean sheet.

The Cascades (1-0-0) will look to build on their strong start on Sunday afternoon, when they travel to Kamloops to face the Thompson Rivers WolfPack (0-1-0). The game kicks off at 2 p.m., and will be webcast at canadawest.tv.

“The lads were fantastic today,” Lowndes enthused. “From top to bottom, they were awesome. The defensive work was unbelievable. They stuck to the plan, and they saw the rewards of that.”

MacMillan opened the scoring in the 22nd minute, receiving a pass from Daniel Davidson and bursting into the box against several UBCO defenders and launching a shot that found the bottom corner.

Byrne made it 2-0 just seconds after the second-half restart. Colton O’Neill moved the ball to Davidson, who sent it to James Najman, who in turn fed Byrne for the finish.

“We were joking on the sidelines how fast it was – I hadn’t even started my watch,” Lowndes said with a chuckle. “We knew we needed to put a stamp on it in the first 10 or 15 minutes (of the second half), but I didn’t expect a start like that.”

The Cascades attempted 10 shots to the Heat’s two, and Skrzeta’s only official save came in the 90th minute.

“There were a couple of scrambles in the box, and they hit the post off a looping header, but we were never really in danger of conceding,” Lowndes said. “We defended as a group. They worked so, so hard.”