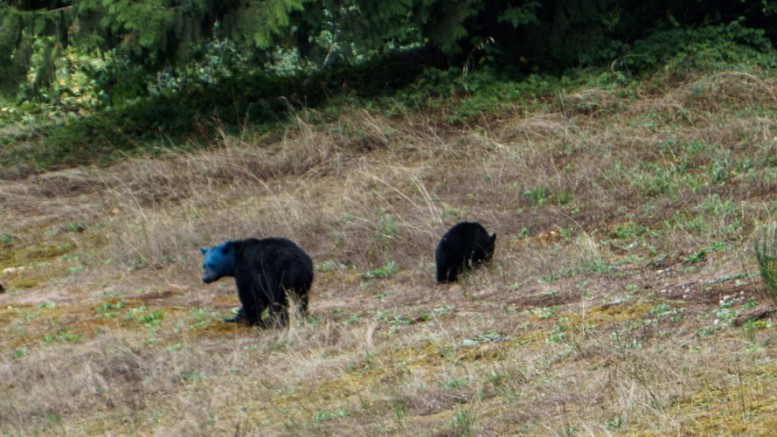 Mission, BC (VanCity Buzz) – It was a strange sight to see near Silvermere Lake in Mission earlier this week when a passerby on his way home from work spotted a black bear and her cubs. Something was unusual about one of the bears; it had a blue face.

Aaron Smith pulled over during his afternoon commute along Highway 7 on the east side of Silvermere Lake around 5:15 p.m. on Tuesday, along with several other vehicles, to get a closer look at the oddly-coloured bear.

An image  and video of the animal shows an adult bear peering around with its normally black face now the colour of a bright blue sky.

“One of the other drivers who had pulled over mentioned that this may have been the result of a trap, or the bear was attacked by someone with blue spray paint,” Smith told Vancity Buzz. He later called the B.C. Conservation line and reported the bear to authorities.

The Ministry of Forests, Lands and Natural Resource Operations believes it was more likely an act of the bear’s own volition.

“Biologists took a look at the photo, and they think the most likely scenario is the bear bit into a can of spray paint and got sprayed. Bears will often chew on containers they find,” said Greig Beithel, spokesperson for the Ministry.

Regional staff have been made aware of the bear but do not have plans to track it or attempt to clean the paint off its face.

“The bear is not in distress, and so the ministry would take no action. The paint will eventually wear off as the hair grows and replaces itself,” Beithel stated.