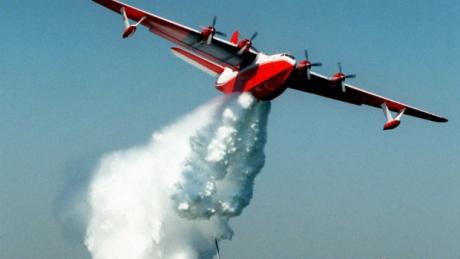 Vancouver/Fraser Valley (News1130) – The Martin Mars water bomber is ready once again to be put to work.

The water bomber had been grounded earlier this month, but Wayne Coulson with the company that operates the plane, says a new pilot has been brought in as co-pilot and the previous co-pilot has been certified as captain.

Coulson notes crew has been ready and available since Tuesday, and has been waiting for word from the Wildfire Service to get into the sky. “We’ve been on stand-by from 8:00 in the morning until 8:00 at night, since Tuesday.”

He says there has been some interest from Washington State as wildfires rage there. “Right now our contract is with the province until next Thursday, and at that time, we’ll see if there’s continued interest either by the province, or potentially, down in Washington State.”

Coulson adds BC has an operator’s agreement with Washington State, so he’s confident Washington could get the Martin Mars if it requested it.

Martin Mars BC Fire Season Over – May Head To The States

Where’s The Waterbomber? It’s Coming To The Forest Fire Rescue

Fort Mac Fire – Where Is The Martin Mars Waterbomber?

Be the first to comment on "Martin Mars Water Bomber Back In Service .. and just in time…"