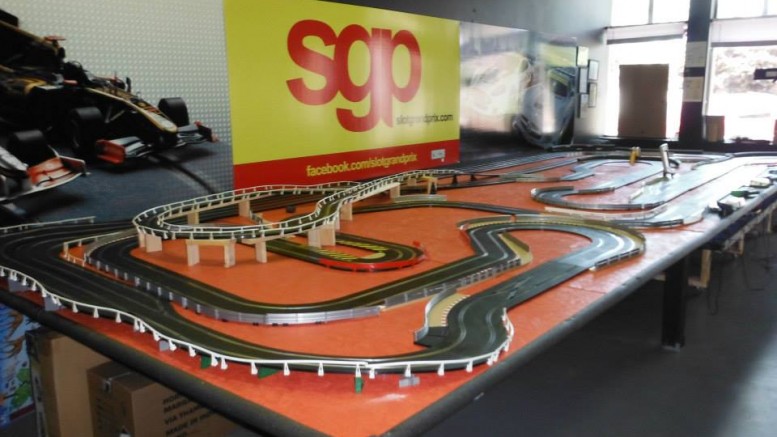 Aldergrove/Abbotsford – Slot car racing  is the competitive fun hobby of racing with powered miniature Car’s (or other vehicles) which are guided by grooves or slots in the track on which they run.

At Slot GrandPrix they use the Scalextric brand from England. There are others such as Ninco, Slot it and Carrera.

The website has info on openings and booking for individuals and parties. The GRAND OPENING is this Long Weekend !

Most models are of actual automobiles, Prototype’s and  some may have bodies purpose-designed for miniature racing. Most enthusiasts use commercially available slot cars, others motorize static models, and some “scratch-build,” creating their own mechanisms and bodies from basic parts and materials.

There are many clubs around the World and World Championships held.

Have a look at a Facebook Video of Slot Grand Prix

During  the 1960s, 1970’s and early 1980’s Slot Car Racing was huge in North America and Europe with sales reaching $500 million annually, including 3,000 public courses in the United States alone. The fad sputtered with the introduction of Video Gaming . Over the last few years people of all ages have craved for a more tactile and hands on experience and Slot Car Racing is becoming popular again.

During this period the Designer’s have been forced to reinvent Slot Car’s they  have become more detailed with faster Motors.

This period also lead to the introduction of Digital tracks with Car’s running on the same track’s and with passing places placed at points that lets the driver control the choice to change.

1 Comment on "Remember Slot Car Racing As A Kid? It’s Back!"