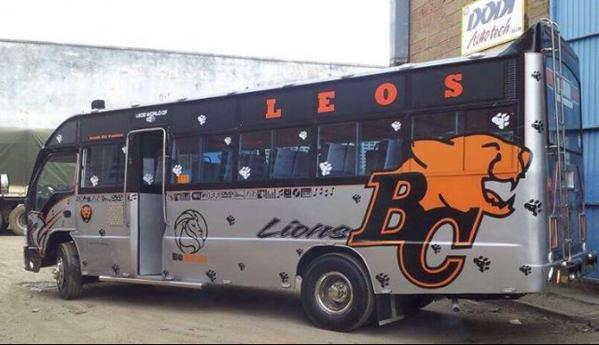 REGINA — The BC Lions proved they don’t have to be playing in their own den to take care of the division rival Saskatchewan Roughriders as they defeated the Green and White by a score of 27-24 on Friday Night Football at Mosaic Stadium.

In order for the Leos to come out victorious, everyone knew quarterback Travis Lulay would have to be a difference-maker, but nobody expected him to do it with his feet.

Lulay rushed for a career-high 105 yards on the ground, while also gaining 127 yards through the air with two touchdowns and no interceptions. The Lions ground attack, which included 94 yards by bruising tailback Andrew Harris, was crucial in a game played in soggy conditions.

The five-foot-eight, 180-pound slot back Weston Dressler put on a show for Rider Nation, but his 127 yards receiving wasn’t enough to give Saskatchewan their first win of the season.

The Lions’ Craig Rowe set the tone early with a sack of Riders quarterback Kevin Glenn on the first drive of the game.

The beginning of the zone-read was put into full effect by Lulay early on as he gained 24 yards on the ground to set up a five yard touchdown pass to A.C Leonard.

A bonehead play was made by Lions return man Marco Ianuzzi when he fielded a punt just in front of the goal-line giving BC terrible field position to start their second drive. Luckily for the Lions, the ground-and-pound rushing attack by Harris was able to get them into decent field position before punting away to the Riders.

Glenn and the Riders offence started to gain momentum in the second quarter stringing together multiple first downs before punting away as the field position battle continued in the wet conditions at Mosaic Stadium.

Rather than continuing the field position duel, Lions head coach Jeff Tedford decided to go for it on third and short but was unable to pick up the first down. The failed conversion seemed to spark the Riders as a 19 yard run by Anthony Allen set up a 49 yard field goal by the ageless wonder Paul McCallum.

On their next drive, McCallum missed from 36 yards out after the Riders picked up 15 yards on a screen pass to running back Jerome Messam and another 15 yards on a horse-collar tackling penalty.

With less than three minutes to go in the first half, Glenn hooked up with Weston Dressler for 27 yards across the middle. A few plays later the Riders’ drive came to a screeching halt after Glenn was intercepted by TJ Lee on a pass that went through the hands of Dressler.

The Leos were unable to amount any offence off the turnover as the punt-off continued when Richie Leone was able to pin the Riders on the five yard line. A 40 yard run by Anthony Allen in the closing seconds of the half wasn’t enough for the Riders.

Despite having the league’s top two offences coming into this matchup, it was the defences that were the story as the Lions led 9-4 at halftime.

The second half started with a bang as BC return man Shaq Murray-Lawrence returned the ensuing kickoff 66 yards the other way. After another horse-collar tackling penalty, Harris ran the first play from scrimmage 15 yards for a touchdown to put the Lions in the lead 16-4.

Just when they seemed to be destined for another punt in their own end, Messam rumbled for 21 yards to pick up a first-down on second and long. Glenn then continued to eye his favourite target by throwing a seed to Dressler for a first-down, followed by another 21-yard gain on the ground by Messam. Chris Getzlaf then caught a 16-yard touchdown pass to inch Saskatchewan back within a touchdown for a much-needed, eight play, 75 yard drive by the Roughriders.

The Lions’ signal-caller was eager to respond as he threw a bomb to Manny Arceneaux for 48 yards down the sideline. The drive ended in a 14-yard field-goal by Richie Leone to extend BC’s lead to 20-11.

Lulay gained 40 yards on the ground after the Riders defence bit on another zone-read by the Leos. The 2011 CFL’s Most Outstanding Player in 2011 then found A.C Leonard once again for a two-yard touchdown to put the Lions in control 27-11.

After a 30 yard hook-up with Dressler, Glenn found Messam for 17 yards to set up a 24 yard field-goal by McCallum to chip away at the lead. McCallum fantasy football owners were once again pleased to see the veteran nail another field-goal, this time from 46 yards to put the Riders within 10 points with time winding down in the fourth quarter.

After being quiet in the game thus far, Glenn hit big-play-threat Jamel Richardson for 49 yards down the sideline to put the Riders in striking distance. Glenn followed this up by dumping it off to Jerome Messam who bulldozed his way down to the one yard line before Anthony Allen plunged it into the end zone with 36 seconds remaining to make it a 27-24 BC lead.

Unfortunately for the Riders, they were unable to recover the onside kick and the Lions ran out the clock.

The 2-1 BC Lions will head back home next week to take on the Toronto Argonauts on Friday Night Football while the 0-4 Roughriders will look to find their first win of the season on Saturday night at home against the Hamilton Tiger-Cats.