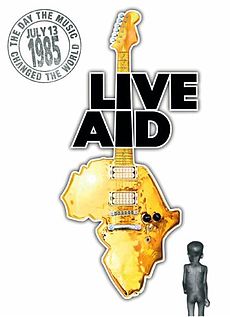 Philadelphia/London (with files from Wikipedia)– Live Aid was a dual-venue concert held on 13 July 1985. The event was organized by Bob Geldof and Midge Ure to raise funds for relief of the ongoing Ethiopian famine. Billed as the “global jukebox”, the event was held simultaneously at Wembley Stadium in London, England, United Kingdom (attended by 72,000 people) and John F. Kennedy Stadium in Philadelphia, Pennsylvania, United States (attended by about 100,000 people).[1]

On the same day, concerts inspired by the initiative happened in other countries, such as Australia and Germany. It was one of the largest-scale satellite link-ups and television broadcasts of all time: an estimated global audience of 1.9 billion, across 150 nations, watched the live broadcast.[2]

Here is the unreleased performance of the Led Zeppelin reunion with Phil Collins:

The set lists and background can be found here

The 1985 Live Aid concert was conceived as a follow-on to the successful charity single “Do They Know It’s Christmas?” which was also the brainchild of Geldof and Ure. In October 1984, images of millions of people starving to death in Ethiopia were shown in the UK in Michael Buerk‘s BBC News reports on the 1984 famine.[3] Bob Geldof saw the report, and called Midge Ure from Ultravox, and together they quickly co-wrote the song, “Do They Know It’s Christmas?” in the hope of raising money for famine relief.[3] Geldof then contacted colleagues in the music industry and persuaded them to record the single under the title ‘Band Aid‘ for free.[3] On 25 November 1984, the song was recorded at Sarm West Studios in Notting Hill, London, and was released four days later.[4][5] It stayed at number-one for five weeks in the UK, was Christmas number one, and became the fastest-selling single ever in Britain and raised £8 million, rather than the £70,000 Geldof had expected.[3] Geldof then set his sights on staging a huge concert to raise further funds.[3]

The idea to stage a charity concert to raise more funds for Ethiopia originally came from Boy George, the lead singer of Culture Club. George and Culture Club drummer Jon Moss had taken part in the recording of “Do They Know It’s Christmas?” by the supergroup Band Aid, and during December 1984 while the Band Aid single was at number one in the UK Singles Chart Culture Club were undertaking a tour of the UK, which culminated in six nights at Wembley Arena. On the final night at Wembley, Saturday 22 December 1984, an impromptu gathering of various stars of the Band Aid record joined Culture Club on stage at the end of the concert for an encore of “Do They Know It’s Christmas?”. George was so overcome by the occasion he told Geldof that they should consider organising a concert. Speaking to the UK music magazine Melody Maker at the beginning of January 1985, Geldof revealed his enthusiasm for George’s idea, saying, “If George is organising it, you can tell him he can call me at any time and I’ll do it. It’s a logical progression from the record, but the point is you don’t just talk about it, you go ahead and do it!”[6]

Queen stole the show with their performance