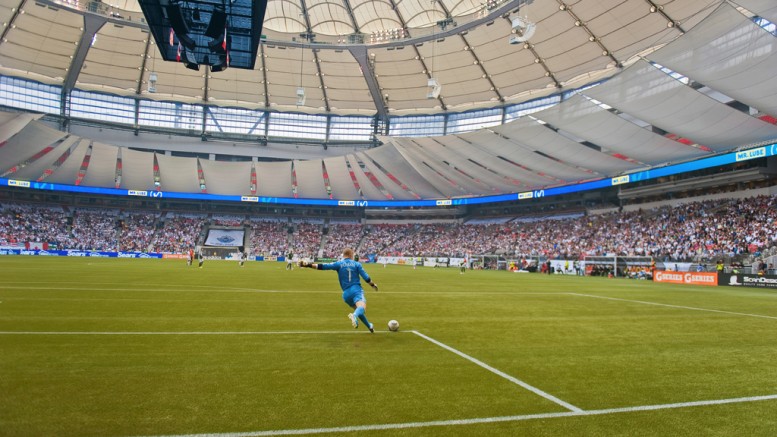 Vancouver/Fraser Valley (NEWS 1130) – The hot and dry weather around BC has many people in the Lower Mainland considering grass alternatives.

So would you scrap the lawn for the look of say, the field at BC Place?

Current restrictions limit people to watering their lawns once a week; everywhere you look, grass is turning brown.

“In the last month, the inflow of requests and the phone ringing due to the lack of rainfall have increased quite a bit. We get two to three calls into the office on a daily basis. It’s quite significant, the amount of people that are trying to educate themselves on the product,” says Scott McCartney, who owns Precision Greens in Langley. The company sells artificial turf for between $8 and $12 per square foot. The average yard is around 1,000 square feet.

Interest started to grow a few years ago with the development of the invasive Chafer Beetle. The hot weather last summer really jump-started sales.

Once it’s installed, there’s not much else that needs to be done.

“It’s virtually maintenance-free. If you have a rake or push broom or a leaf blower, just keep the tree debris off, especially heading into the winter months,” says McCartney.

He notes artificial turf is completely pet-safe, as it does not absorb moisture.

“There are number of reasons why I did it, One of the big benefits is I don’t have to cut the lawn; it’s perfect every day.”

There is also no need for fertilizing or treating for weeds or moss.

As the dry spell drags on for the South Coast, Voth also appreciates the fact he doesn’t have to turn on a sprinkler to maintain some of the greenest grass in the neighbourhood.

“Absolutely! My front lawn is still grass but I’m not watering it so it’s brown at the moment,” he laughs, while enjoying his much lusher-looking back yard.

Mosquitoes Shouldn’t Be As Bad As In Past Years

Be the first to comment on "Would Water Restrictions Convince You To Scrap The Lawn For Artificial Turf?"