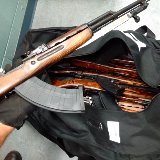 Abbotsford, BC – On Sunday, June 21, 2015 at 1:30 pm the Abbotsford Police Department was called to a rural location in the 7800 block of Lefeuvre Road. A caller reported finding a duffle bag full of firearms and a box containing ammunition in an outbuilding on the property. APD Patrol Division officers arrived on scene and seized 8 SKS semi-automatic rifles with magazines in a black duffle bag, along with 34 boxes of .762 ammunition and 10 additional magazines in a cardboard box.

The investigation into these firearms, magazines and ammunition is continuing.

Be the first to comment on "APD Locate Guns, Magazines and Ammo On Lefeuvre Road"