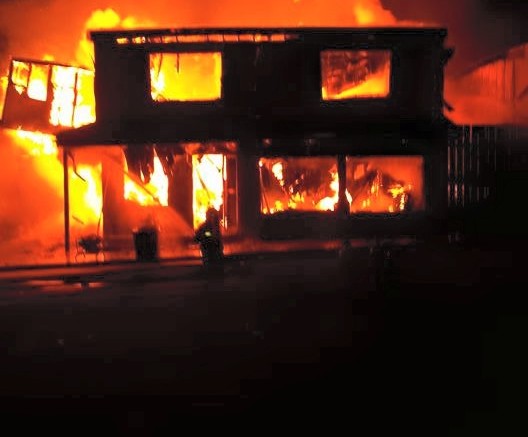 Hope, BC – (With Files From The Hope Standard) 9 AM UPDATE-  Hope Fire Chief Tom DeSorcy tells FVN Fraser Valley News that no one was hurt. The cause of the fire is still under investigation.

There may have been tenants upstairs and that is being reviewed.(3 apartments above Canyon Carpets and an apartment attached to Jay’s Appliances).

DeSorcy also praised his crew on Facebook – “Tip of the hat to the volunteer firefighters in Hope and Yale for their work last night and today. A tireless effort by a professional team. Time for some sleep guys.”

The Hope Standard newspaper is across the road on Wallace Street. The newspaper was not damaged but they tell FVN that the community is crest fallen after this fire.

ORIGINAL STORY – Social media lit up overnight from Hope as fire ripped through Jay’s Appliances and Canyon Carpets. Tenants who lived in the adjacent apartments lost their homes. Fire and RCMP crews continue their investigation. The Hope Bulletin Board Post on Facebook has a number of photos and pictures.

Our little town has taken such a beating…so many lives lost to accidents…cancer…etc. now long time residents Jim and Suzy Shaw have lost their business..Canyon Carpets went up in flames…I took videos and photos..as I was leaving the 2 businesses adjoined to Canyon Carpets were also on fire . I pray they could be saved..but it’s doubtful. ..Firefighters are struggling hard to get the flames under control, but the heat is so intense, the flames relentless…my heart really hurts for Jim , Suzy and their employees…and for the families that lived in the apartments above the business… what does the future hold for this beaten done town ?? Just heard the flames are out…hoping that meant the other 2 businesses were saved..